In February of 2011 the decision to go to a party changed the course of my life. I’m serious. I can point to the moment I started the path towards not only my first, but second job out of college because I attended that party.

The setting was alumni weekend. As a senior I made it a point to attend the alumni panel. Bonnies who had left the safe bubble of St. Bonaventure University spoke about life in the “real world” and were subsequently mauled by desperate second-semester seniors networking their way into employment. Naturally, I played it cool and left the event right after the alumni were done speaking. Okay, it wasn’t so much playing it cool as having a high school friend visiting and needing to go show her a good time. So, like most college kids we found our way to a party.

As the drinks were poured (don’t worry we were 21) I started to watch some alumni trickle into the house. Courtesy of the alumni panel, I knew one graduate worked for The Late Show with David Letterman. Luckily, I knew him from our days busting underage classmates for drinking and general debauchery on campus. Oh, have I not mentioned I was an RA in college? 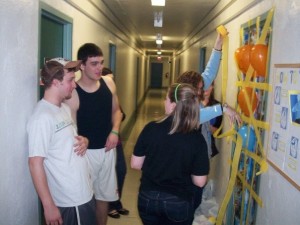 (The first time Peach met me I apparently yelled at him to get off my floor. Such a romantic meet-cute!)

I left my high school friend on the couch chatting it up with a college buddy of mine while I approached this mythical creature: an employed college graduate! After some general pleasantries and banter about RA life I asked about his job. Even though I was probably openly salivating at the prospect of ever getting to work for one of the biggest names in Late Night TV, I did my best to keep it together and wrapped up the conversation after a few minutes to let him get on with his night. Obviously, this isn’t the end of the story.

Upon heading back to my friend on the couch, I saw the group of people she was chatting with had expanded to include a few alumni. One of whom I recognized, but had never really known during his time at school. It didn’t take long for me to ask him what he did and to discover he worked in public relations. After getting his business card, I deemed the evening a success and went back to beer pong. I mean having intellectual conversations about current affairs.

To save you details about the angst-riddled months before graduation let’s just fast forward to what happened. I followed up with the Letterman alumni and after some back-and-forth about the application process I sent away a resume to the hiring manager in early March.

If you are a long-time reader, you may remember I graduated college without a job prospect. A week after I walked the stage, the woman in charge of the page program for Letterman gave me a call. I flew up to NYC a few days later to interview. My alumni friend was kind enough to let me crash on his couch to spare this broke millennial the cost of a hotel. He showed me around his neighborhood and we went to drinks with the aforementioned public relations alumni. Did I not mention those two are really good friends? Funny how this is all starting to come together!

I landed the job at Letterman and moved to New York a couple weeks later. 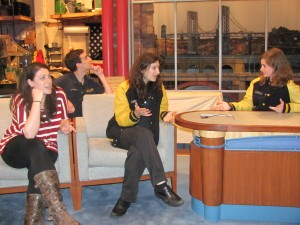 (I still wear that coat around when I want to feel like a big deal.)

So, thanks to a party in February of 2011 I secured my first job out of college and moved to New York City. After a year working as a page for The Late Show, I moved onto to my next job working for the same communications agency as alumni #2. Yes, he did help me get my foot in the door. Like I said, I can point to the moment a small decision changed the course of my life. Networking, especially in college, is one of the most valuable career moves you can make. Apparently, partying is the other.

18 responses to “The Power of Partying (I mean Networking)”