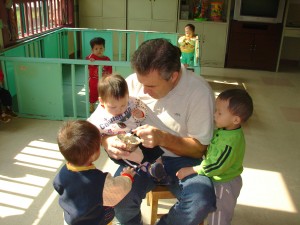 Long time readers may know that I spent much of my childhood living in Asia. Previous posts have discussed the privileged upbringing I was able to experience and the myriad of opportunities being an expat afforded me (including getting used to flying in first class).  Without a doubt, the most mind-opening part was traveling to dozens of countries before I became a legal adult. My Dad has chronicled many of our family excursions and his work trips on his own blog. Today, I’d like to share one of my favorite posts he wrote, about sales tactics from child peddlers on the streets of Vietnam, Cambodia and a special girl from Tibet. This post originally ran on his site about a year ago.


For most of the past 20 years, I have been involved in international business. Like many of my generation seeking upward mobility, I worked a few years after graduating from college and then got an MBA. Over the years I also attended “executive” education courses at some of the top business schools. Despite all the expensive training, I found most of my business education of marginal value compared to actual experience. The majority of successful business relationships I have made over the years weren’t because of complicated strategies and clever tactics. Business boils down to people and establishing a good reason for them to trust you with their business.

Over the years my family lived in Asia, we visited many places that would not be considered hot beds of business education. Cities like Ho Chi Minh (Saigon), Siem Reap, and Lhasa but in each place I learned a lesson that had more value than many of the case studies I toiled over in business school.

During our first trip to Viet Nam, we stayed in central Ho Chi Minh City. Shortly after arrival, we went for a walk. A few blocks from the hotel we were approached by a little girl that looked like a 3rd grader but was probably in Jr. High. She immediately asked about our family – how old were our daughters? Where were we from? Why did we come to Viet Nam? What were our travel plans while we were in her country?

She was charming and spoke English very well. After drawing us in, she got down to business by showing us what she wanted to sell us – Lonely Planet Travel Guides which a large percentage of ex-pats on vacation use for reference.

She told us the books she had were great copies run on nearby high speed presses – she also threw in a few more technical details that went over my head. She handed the Lonely Planet Guide for Viet Nam to my wife and offered us a price that was about 25% of what we would have paid for it in a bookstore. Ever the careful shopper, my wife started to look though the book. The girl pointed out that the cover was just as good quality as an original. Suspicious that my wife was making sure all the pages were in the book, the young lady stopped her and said: “Look, lady – this book is good quality and cheap – are you really going to check all the pages when you are spending less than $4? It isn’t worth your time.”

This kid was a sales guru – in the space of a couple minutes she had charmed us and established a relationship, qualified us as customers, showed her product, handled objections, and put a closing argument on us we were powerless to walk away from. In the end we bought more than one book. A true sales professional in a child’s body, I can only imagine what the future holds for her. 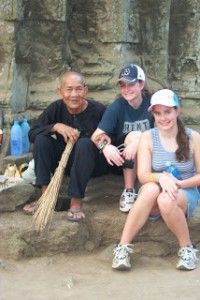 (We found the gentleman who was on the cover of the Lonely Planet Guide to Cambodia.)

A few days later we flew to Siem Reap, Cambodia to visit the ruins at Angkor Wat. We were tired and sweaty after a long day of hiking and climbing. As we made our way back to our hired car, a young lady confidently approached us. “Hi, I am Lillian, are you Americans?” she asked. When she got an affirmative response, she followed up with “what state are you from?” Once she heard North Carolina, she said “the capital of North Carolina is Raleigh” and then said “I know every state capital”. That was her hook – she reeled us in. “Ok”, I replied “what is the capital of South Dakota?”  “Pierre” was the immediate response. I closed with “Mississippi?” Her rejoinder was “Jackson.”
Fully aware that the majority of graduating high school seniors in the US cannot name all the states and state capitals, I was impressed by this pre-teen from the third world who was preparing to access my wallet.
Her transition to making a sale wasn’t brilliant but it was effective. She told us that since she had shown us that she knew something about our country; she wanted to “help” us learn more about her country. She produced a slightly dog – eared copy of a book about the Khmer Rouge and Pol Pot – who was responsible for the massive genocide in Cambodia that happened during my college years. Since she was asking more than the price printed on the book and the book wasn’t new, I tried to negotiate the price but she was having none of it. She closed the deal with a smile and I walked away, humbled but pleased, with my over-priced book. 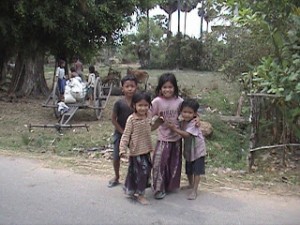 (Friends we made on the street who invited us into their home.)

What impressed me about both transactions was that unlike so many experiences when people try to sell to tourists in the third world, neither of these young ladies made the common “guilt” pitch that we should buy whatever they had to sell because we had money and they were going pester us until we gave them some.

A couple years later we visited Tibet. Lhasa was definitely on my bucket list but we had some concerns about accommodations and food. I had visited much of rural China and knew when travel agents talk about “best available” accommodations – it normally is not good news. We were lucky in Lhasa – all the toilet paper and granola bars I brought  with me turned out to be unnecessary insurance.
We stayed in what had been the Embassy for Nepal. We had a great time in the thin mountain air.  Thinking our time on the “rooftop of the world” would mean a week of roughing it, we were surprised to see Mexican and French restaurants in unimpressive buildings but with great food. One night after having excellent cheeseburgers, we walked out of a restaurant and were greeted by a young girl who asked if I knew the words to “Red River Valley” – when I told her I didn’t know all the words, she asked if I would sing it with her anyway. Strange request on a dusty side street in Tibet from a girl who was born during the heyday of the “Smashing Pumpkins.” I did my best to sing along with this girl who was tolerant of this glaring gap in my musical knowledge. In the distance I could see an older man watching the girl carefully.
I didn’t get the feeling he was a stalker, so I assumed they were connected. When the singing was over, I asked why she knew the song. She said her grandfather learned it from Americans who ended up in China during  World War II. He learned English from songs. I assumed grandpa was the man watching from afar. 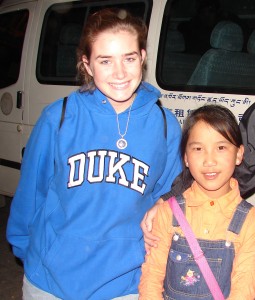 (This is Sarah. And yes, I did crop my sister out. She got cranky last time I used a photo from “braces phase.”)
A few minutes passed as my wife and daughters spoke with “Sarah” – her English name. It came up in conversation that we were living in Japan. Suddenly a torrent of Japanese came out of Sarah’s mouth. I asked her in Japanese how she learned Japanese. Again – grandpa. At that point, I really wanted to meet grandpa so I walked over and introduced myself and asked about his precocious granddaughter.
He explained that the Chinese government was changing Tibet and that he wanted to prepare Sarah for a life outside of Tibet and maybe outside of China. A couple times a week they went out on the streets of Lhasa so she could practice speaking foreign languages with native speakers. He normally stayed in the distance so that Sarah would learn better how to interact and rely on her own skills. I could have spent a couple days talking with this interesting old man. Grandpa had a clearer globalization strategy for his granddaughter than most American companies have for their business. Grandpa was clearly not a man of means but he was getting his granddaughter ready to succeed in a changing world. Rather than try to sell us something, Sarah wound up giving my wife and daughters bracelets. We also got her email address and it was our hope to stay in touch. Unfortunately we never got a response to emails sent to that address. Hopefully we simply wrote it down incorrectly.

Traveling in Asia as a family for over a decade was a great experience. We always called it “vacation” but the lessons we learned were priceless.

Please read more of my Dad’s mind-blowing posts about life in business, as an expat and repatriating to America over on his blog (you should all subscribe)!

36 responses to “Sales Lessons from the Streets”