Six hours into a babysitting shift, the bright screen of a text message caught my eye. I reached down to pick my phone off the couch and already sensed what was coming. The clock was dangerously close to midnight and a text from my employer could only mean one thing. She wanted to stay out later.

I swiped open my phone and saw her emoji-riddled text message. “Can you stay until 1?” (smiley face, hearts, smiley face).

“Sure,” I started typing back while looking over at her extensive DVD collection. “But could I also get cab fare home?”

In seconds she’d responded, “Of course. When it’s this late, I’ll always give you cab fare.”

In my early days of babysitting, I never asked for cab fare but would gladly accept it and then pocket the extra $20 and take the subway home. I babysat in safe areas and never felt threatened walking to or taking the subway home at night.

Even on nights when I’d have to be up only five hours later to work an opening shift at Starbucks, I would take the subway and risk taking an hour to get home (late night trains are infrequent) instead of the 15 minute cab ride. In those days, $20 was a lot of money and worth an hour less of sleep.

These days, I value my time enough to flag down a yellow cab and get home in 15 minutes instead of the hour it could take with late-night trains. I also don’t need to babysit to make ends meet. I still babysit because I truly enjoy the family I work for, I completely set my own schedule and I put the money in my “fun fund” so I can loosen up my purse strings a bit.

When 1 AM rolled around, the mother strolled in from her night out on the town and, as promised, paid me my wage plus cab fare.

I walked out of the apartment building’s doorman-guarded entrance and onto the silent streets of the Upper East Side. New York may be the city that never sleeps, but the residents of the UES certainly shut down pretty early. 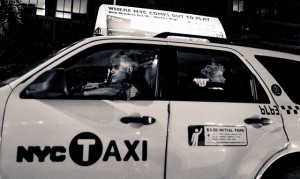 In the interest of getting home quickly, I walked a block down to an intersection and flagged a yellow cab.

Settling myself into the backseat, I gave the cabbie my address in Queens (yes, they will actually go there) and dialed up Peach to have our routine “good night” phone call.

12 minutes later, the driver was approaching my street. I gave him a few directions about where exactly I lived and he pulled up to my row house apartment. As I pulled out my credit card to pay, the cab driver inquired, “What had you out this late?”

To most cab drivers, a 20-something woman coming home on a Saturday night at 1 AM would seem rather early. But given that I was clearly not intoxicated and had flagged him down on the almost suburban-like streets of the Upper East Side, he curiosity was piqued.

“Oh, I do some babysitting for extra money,” I said nonchalantly.

I caught a glimpse of him smiling in his rear-view mirror.

Nodding, I got out of his car with those words ringing in my ears.

This is America, right?

In the wrong context, that sentence could certainly be some sort of mantra for the Tea Party or fanatical groups dedicated to keeping America from opening her boarders to immigrants.

But to my cab driver, an immigrant, those words meant that America was a land where one must work hard to survive and live the American Dream.

There has been so much talk over the years about the disappearance and reinvention of the American Dream.

Truthfully, I’d never given much thought to the “American Dream.” I spent my formative years happily living outside her boarders. I didn’t focus on a white-picket fence version of my future with a husband and 2.5 kids. Frankly, my “American” Dream was/is to eventually find a way to live as an expat again (with a lucrative paycheck). I claim American citizenship simply because I’d had the fortune to be born here. And I do mean fortune.

America is far from perfect. We have poverty. Disease. Political tension. Racism. Sexism. Abuse. Crime. And yet, people from around the world still flood into America in search of a better life.

No, America is not a magic land where hard work alone can move you out of your circumstances and into another tax bracket. There are scores of hardworking men and women who simply can’t catch a financial break and stay trapped in a cycle of poverty. But for some, America is a land where hard work and perhaps more importantly, luck, can drastically change their circumstances.

For me, in that moment of the early morning, America was a land where a young woman of privileged background and a cab driver, who immigrated to this land, shared a moment of understanding about what our shared country was founded on and what it takes to survive.

After all, this is America, right?

48 responses to “This is America, Right?”