Dear enraged feminist readers – don’t worry. This is not a sexist diatribe.

The portion of my brain housing a financial panic button started buzzing and I ran through four of the five-stages of grief.

Poring over my statements I started to see these charges were indeed made by my hand (or finger in the case of online purchases).

The financial panic button began blaring as the picture came into focus.

Being a woman ruined my budget and for the first time in a very long time, I would have to dip into my savings account to pay off my credit card bills.

But let’s backtrack to why my ownership of lady bits is directly correlated with my busted budget.

Part I: Letting My Emotions Control My Budget

As a feminist, I generally begin seething when I come across any of the countless stereotypes of women and money. Oh you know, the ones about how we don’t invest. We don’t save as much for retirement as men (with no nod to the pay gap). We can’t negotiate well. We only want to marry rich men. A woman is just out to spend her husband’s money. A woman should be the primary caregiver and take her husband’s last name – oops ranting – let me reign it back in.

It appears there is a woman-centric stereotype I did not receive proper immunization for: the desire to nurture*.

Peach moved to New York City just over two months ago for a three-month stint as a student teacher. His reasons for coming were two-fold.

Unfortunately, student teachers are glorified unpaid interns. He works a full, 40-hour (or more) week and receives no compensation, while still needing to take some other graduate courses, which makes it tough to get a part-time job. Peach also had to quit his full-time job (which he did on top of being a full-time grad student) in order to move to New York.

Peach saved up for a long-time to move here and has a nest egg to live off of for three-months. Regardless, I still feel a twinge of guilt at times that he’s here spending thousands of dollars when he could be living at home, rent-free and getting his student teaching credits accomplished. He also isn’t living with me and paying a subsidized rent (I didn’t think it would be good for us), so he’s spending over $2,000 in living expenses alone for his apartment.

This seed of guilt started to grow into a sapling and then a full-blown oak tree, which I tried to chop down by beginning to cover small costs.

If I wanted to go out to dinner instead of having to cook, I’d offer to pay. Or I’d pick up the tab at happy hour. Or I wouldn’t tell him the real amount it cost for us to travel to my cousin’s wedding and cover 70 percent instead of 50 percent.

These small financial gestures – which I tried to space out, so I didn’t emasculate my boyfriend – began to add up until I reached a point of crunching numbers and facing a financial panic attack. [I’d also like to take a moment to appreciate my boyfriend who is confident enough to be okay with me picking up tabs and encourages the notion that I may be the long-term breadwinner in our relationship. Talk about an evolved man.]

After assessing the damage to my bank account, I called a meeting with Peach — or more accurately asked him to pause How To Get Away With Murder so I could rant.

I admitted that I’d been trying to sneakily cover some expense of him living here so we could enjoy living in New York together without putting too much of a burden on his wallet. He told me I didn’t need to cover for him. He’d been diligent with his finances and built some discretionary spending into his savings.

We spoke through my plan to get back on track and ways to have him hold me accountable.

Part II: Getting Back on Track

First, you may be wondering why $1,412 busted my budget. To many of you this probably sounds like a relatively small sum.

I don’t typically disclose income or real financial numbers on this blog (a blogger needs to keep some secrets). But for the sake of explanation, I’ll break it down a bit.

After contributing to my 401(k), putting money in my savings account, paying for rent, utilities, cell phone and metrocard – I have just over $1,000 left to spend in a month. For the sake of clarity and full-disclosure, all my side hustle income goes directly into savings and I don’t count any of it towards discretionary spending.

So, when I ran my budget and saw $1,412 – I realized for the first time in a very long time, I would need to pull some money out of savings to pay off my credit card. I also don’t tend to keep much in checking other than what I’ll need in the month.

While this $412 isn’t a massive amount of money by any means, it’s significant to me and sets me back on some of my financial goals for the remainder of the year.

In a silver linings moment, this experience does reinforce my militant mentality about saving and proves the importance of a fully funded savings (and/or emergency) account.

This long story brings us to my final confession: swiping with a credit card makes you spend more than handing over cash.

There. I said it. All you Dave Ramsey loyalists can start amen-ing and nodding fiercely towards your computer screens.

I will still 100% continue to use credit cards and in no way blame my credit cards for my overspending last month. Frankly, I’m sure I would’ve still just taken more money out of the ATM if I were a cash-only kind of woman.

However, I will acquiesce to the proven psychology that you think longer and harder about purchases made with cash over the swiping of plastic.

On that point, I woefully admit I’ll be participating in a cash-only diet challenge and tracking each penny I spend for the month of November. 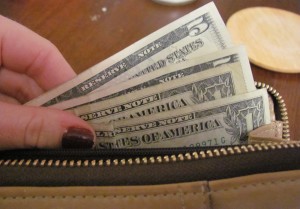 Typically, I budget by saying I have X-amount to spend in a month and then I run my numbers weekly to see how much I have left to spend. As a woman with no dependents and no debts to pay off, it’s been effective until last month.

This month, I plan to give myself an allowance of $200 a week in cash. This money will need to cover groceries and all extracurricular activities. If I don’t spend all $200 in on week, the remainder is allowed to roll over to the next week. If I buy using a credit card, for example a book on Amazon, I’ll either a) put the cash equivalent in a savings envelope or b) subtract it from the $200 I can take out for next week.

Four days into the challenge, I’ve spent $96.98 of my weekly $200. Granted, this included grocery shopping. But the rest of the month will certainly be interesting and I anticipate will encourage me too enter hyper-saver mode.

I will post updates throughout the month to keep myself accountable and allow you to gleefully poke fun at my fall from financial grace. Hmm, I’m suddenly craving an apple.

What have you done to rectify a busted budget?

*A few of my friends reading this just choked on their water laughing at that line. Those who know me well don’t see me as a particularly, well, nurturing, individual. In fact, I get accused of being more akin to those with a Y-chromosome instead of my fellow double-Xers.

38 responses to “Being a Woman Busted My Budget”