Reading the Hunger Games brought back flashes of my childhood Easter egg hunts. When it came to neighborhood and Church hunts, my sister and I were Career Tributes. We possessed ridiculously high competitive drives and uncanny abilities to duck, dip, dodge and dive for the best eggs and find even the most deviously hidden gem. When it came to the Easter egg hunt in my home, I wouldn’t even make it to the Cornucopia before being taken down by my younger sister. 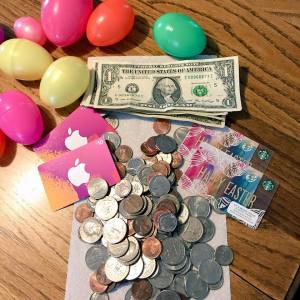 Why am I drawing such a gory illustration of the childhood experience dedicated to snatching colorful, candy-filled eggs off the lawn?

Because in my home, Easter eggs quickly phased out of being filled with candy and instead contained cold-hard cash.

And one egg held more money than almost all the rest combined: the Golden Egg.

My parents used Easter egg hunts to teach us the harsh reality that life simply isn’t fair. A set amount of eggs would be marked with E and C to guarantee a degree of sportsman-like conduct, then the rest would be free-for-all and only one Golden Egg lay hidden. (Harry Potter’s quest for the Snitch also gave me heart palpitations).

Cailin and I would be held in the garage (or bedroom when we lived in an apartment in Japan) and then unleashed to grab all the eggs we could. Inevitably we’d pause to do an egg count and determine how many remained before running back, unconcerned with the remaining regular eggs and solely focused on the Golden Egg.

My sister gives off a nonchalant, “I’m not competitive” vibe while I’ve been known to flip the occasional board game and debate points in mini-golf. But underneath her cool, calm façade lurks the heart of a Golden Egg seeking ninja with the ruthlessness of Frank Underwood.

For a solid five years in a row, Cailin snatched up the Golden Egg. One year even finding it buried in a container of fish food for koi. Overall, I’d say the score is something like 10-3. She’s probably made over $300 from defeating me in Easter egg hunts.

I dealt with defeat, after defeat, after defeat – but my parents never offered to hide two Golden Eggs. Never tried to sneak an extra few bucks into my basket. Never snuck me special clues to help my quest to defeat my sister. Instead, they let survival of the egg hunters play out and occasionally even mocked my complete inability to find the egg first (maybe I’m Golden Egg colorblind).

Much like the Krispy Kreme donut lesson and the paying for 50%, this became a cornerstone of my financial education.

Unlike my participation-trophy-winning peers, I learned at a very young age that when you’re not first you’re last (I think that makes five pop culture references in this post). And that money is never distributed equally – even on a relatively level playing field.

At 25-years-old, my parents still indulge me in yearly hunts. Now, my cousins substitute in for Cailin when she can’t make the cross-country trip to crush my spirit.

Somehow, I still manage lose the Golden Egg, despite being within inches of its hiding place. As my father aptly described this year, I’m the Buffalo Bills of Easter egg hunts.

One day, the Golden Egg shall be my precious. Until that day, I continue to learn how to take a beating and keep coming back. Not unlike my feelings on why it’s important to invest. I may be in a down market, but one day it’ll swing back in my favor and there will be glorious returns.

12 responses to “The Golden Egg: A Financial Easter Tale”