Welcome CBS Sunday Morning viewers! Here is recap about Broke Millennial and the pearls of personal finance frankness you can expect to find around these parts.

Broke Millennial started after a cup of coffee with a friend at 2 a.m. We were 23 and just entering our first real jobs after a cushy year of post-collegiate work as pages for The Late Show with David Letterman. 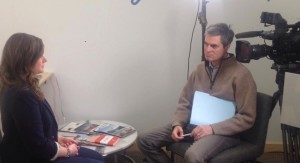 My friend waxed poetic about her desires work in the New York City improv scene, however, her desk job as an assistant to major television network executives kept her from being able to actually pursue her dreams. But hey, the money was good, and she needed to pay rent.

I casually asked her why now wasn’t the time to go after dream of creating sketches and acting? She was young, no dependents and no student loan or consumer debt. Babysitting, waitressing or working as a barista could pay the bills – at least for a year or two.

“Yeah, but money just stresses me out,” she said. “I basically just don’t pay attention to it and then just hope I have enough at the end of the month to pay all my bills.”

I started asking my friends, relatives and random co-workers about their relationship with money. Some talks were tense – it’s still a taboo topic after all. Others quickly opened up about their confusion or stresses. But all the conversations had a similar tone; millennials were confused and didn’t have a good place to go in order to learn about personal finance.

Money fascinated me from a young age. In fact, it all started with a box of Krispy Kreme donuts, which ultimately turned into a love of talking about money. I didn’t major in business, finance or economics. Instead, I pursued theatre and journalism in college. It may make me a strange choice to give financial advice, but it enables me to speak and write about the topic in a relatable way.

Broke Millennial became a platform to share funny and embarrassing stories from my own life in an effort to get people comfortable talking about money, sharing their own experiences and ask questions.

This blog is an effort to help my fellow millennials learn about personal finance without a bunch of financial jargon or overwhelming equations. I rely on story telling with a hefty dose of sarcasm and humor.

It’s important to know that I’m not now, nor have I ever actually been, broke. The moniker spoke to me in January of 2013 as a way to describe the way many of my peers felt while balancing student loans, moving away from the safety of college and the transition into adulthood.

If this is your first time here, below are some posts from the archives you might find interesting: