“Don’t read the comments. Just don’t do it.”

I’ve given this advice to countless other writers after their work has been syndicated to a large platform or they’ve published their first piece on a site with lots of traffic and vocal readers.

Over the years I’ve gotten a pretty thick skin when it comes to ad hominen comments that focus on my youth, gender or looks instead of the content of my writing.

Recently, I broke my own rule and read the comments posted to a rather raw, intimate piece about getting financially naked with Peach.

The piece received a nice bit of traction when it first was published on this site. Then, NYMag reached out and requested to reprint it on The Cut in December. I agreed and after a few minor tweaks, the story went live.

The comment section is quite tame compared to others I’ve read, but a few points really struck me. So much so, that I felt the need to address them, ruminate on some, craft my response but also allow readers to tell me what they think.

For those who did not read the original post, I share a story about the time Peach first told me his debt burden, which is in the form of student loans from earning his undergrad degree. (Props to Peach, he paid for his Masters by working full-time and paying out of pocket).

One reader deemed my conversation with Peach an “ugly judgment regarding debt…”. Based on the context of the comment, it appeared to bother her (assuming the poster is a woman) that I see a difference between credit card debt and student loan debt and that I even go so far as to call credit card debt a red flag. Student loan debt, while cumbersome and a nuisance to my financial goals, is not a deal breaker. Had Peach confessed being $30,000 in credit card debt – yeah, I might have reconsidered a future.

The commenter has a right to feel that debt is debt and that it’s all created equally. I, however, disagree.

Does this make me judgmental about debt? Yes, I guess it does. Some people would never marry a smoker, or someone that doesn’t want kids or (heaven forbid) is a cat person. For me, I draw the line at abusing plastic.

One issue with a reprint of your work on a major site is that readers don’t understand certain context. Regular Broke Millennial readers are used to me referring to my boyfriend as Peach. Quite a few even know why he goes by the moniker.

Unfortunately, to someone unfamiliar with my work, or my boyfriend, this seems like an “infantile or degrading nickname.”

I can see why. It sounds childish and cutesy. In a post all about how I’m the one financially further ahead, calling him Peach just sounds downright condescending.

Peach is actually used not because he has a fuzzy exterior (he does have a significant beard) – but because it’s a play on his real name. I’m not the only one that regularly calls him Peach. But maybe in the future I use some run-of-the-mill name like “Joe” in reprints. 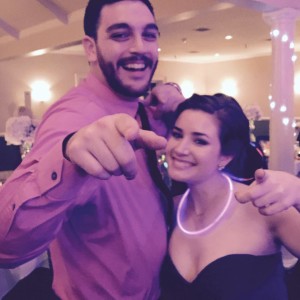 People project on you

Personal finance is personal. You hear people go on-and-on about this detail. What works for me in my own relationship with money and my romantic relationship and our association with money is not a blue print for everyone’s success. Just like some married couples want joint banking and some don’t.

Putting my life experiences on display can help provide a sounding board for others – but that certainly doesn’t mean it’s the only way to success.

When Peach and I got financially naked, he made it very clear that he wanted to take ownership for his debt and that me absolving his debt from my savings wasn’t an option. I in return made it clear that if we were married it was no longer his debt but our debt because it impacted my life too. For that reason, I wanted to help. This is how we came up with our hypothetical strategy (because we aren’t married) of living off my salary, while the bulk of his salary (minus savings goals and some fun money) goes towards debt repayment. It enables Peach to feel ownership of his debt, while I still feel good about how efficiently the debt is getting paid off.

Interestingly, this hit a nerve for some. One comment eluded that if I ever used the “we lived off my salary” line in an argument it would mean Peach would quickly find himself a side piece.

What perplexed me, apart from thinking “Wow, this person doesn’t know Peach!” was that I would still be thinking of it as my money once we were married. I have a joint mentality when it comes to finances in a marriage. The money I earn and the money he earns is our money. Frankly, it’s probably all going into the same bank account anyway – but if it makes Peach feel ownership and satisfaction to be paying off his debt with the portion he contributes to the total pot, then so be it.

Were I completely supporting him while he tried to pursue a dream of making Buffalo Bills collectable bobble heads – then yeah, I might bring that up in an argument.

Perhaps the other reason this strikes a nerve with me as that I’m a woman writing about being the breadwinner. Had Peach written this story, do you think a commenter would say I, the wife, would be likely to step out on him if he brought up “supporting me”?

And this brings us to one of my favorite conversations (other than money of course): sexism.

Another point I make in my story is that I’d prefer Peach ditch the engagement ring in lieu of a student loan payment.

This statement (and an accompanying post) comes from a real, true place in my heart in which I find the entire nonsense of engagement rings (and the token sexism) infuriating. I’d be more than happy to exchange plain wedding bands and call it a day.

A very real rage boils up inside of me when people – mostly women – imply, or straight up tell me, that I’ll resent my man if he doesn’t buy a shiny bauble when asking me to spend the rest of my life with him. What am I an infant? Do I need to get bribed with a shiny object to be convinced to do something? Should I be branded prior to marriage while he doesn’t have to be? Do I need to fall back on antiquated gender roles that would state he isn’t a good enough provider if my ring isn’t living up to the four C’s (yeah, I know jewelry things)?

*Pulling together my feminist rant*

I deeply, truly have no urge to get an engagement ring. However, Peach – as lovely a man as he is – does feel the need to provide one (damn you traditions!). So, when the day comes, I shall acquiesce to wearing one so long as I don’t get a separate wedding band and we just use the very basic engagement ring during a wedding ceremony. Compromise. (I can feel all the married people reading this thinking, yikes, you are a tough cookie.)

Engagement rings are the perfect blend of consumerism and most excellent marketing campaigns. Oh, and a way to avoid a woman suing for her damaged reputation if she compromised her virtue before the wedding night.

Moral of the story

If everyone agrees with your writing, then you’re doing something wrong. Yes, it’s fun to respond to critics in this type of forum, and I’d probably be a little bummed if no one disagreed with me (feel free to do so on this post too). Getting trolled a little bit means you’re mixing it up and making people think. Plus, it also means complete strangers are reading your work and taking the time to comment. So really, how cool is that?

32 responses to “Putting the Personal in Personal Finance”