Tax day has come and gone. Congrats to those of you with hefty returns you’re already excited to spend, or better yet, save. My shove into the world of taxation didn’t come during my sophomore year of college when I worked my first legit job. The first memory I have of taxation (pretty sure it was without representation) occurred Halloween night 1993.

Dressed in my finest green felt with an orange feather stuck in my cap, I made the rounds of Heritage Woods as the cutest Peter Pan you ever did see. My one year old sister held court in her stroller dressed as Tinker Bell. Between her huge blue eyes and my endearing wit, we were really bringing home a substantial candy haul. 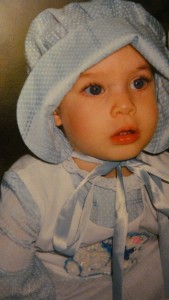 (Seriously, could you resist those baby blues? And no, this isn’t her Tinker Bell costume.)

When we got home I ran to the living room and dumped the contents of my cloth pumpkin bag onto the floor. Oh the candy. So much yummy candy. Unfortunately, our two big dogs came running and I had to defend my stash. My Dad called off the hounds and I eased up my defensive stance realizing, a moment too late, a bigger threat had entered my candy territory. 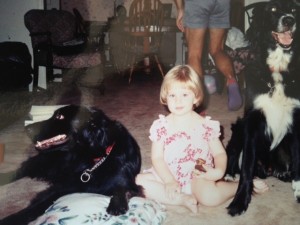 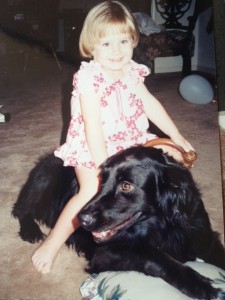 (Attempts to steal my goods aside, they were my best friends. Besides my sister of course.)

Leaning down to pluck a fun size bag of Skittles from my pile, my Dad said the two worst words I had ever heard, “candy tax.” My mouth dropped open and I yelled, “put it back!” Those Skittles were my hard earned income. I shoved my body into a green-felt Peter Pan costume for those Skittles. I told jokes to the cranky lady down the street for those Skittles. THOSE WERE MY SKITTLES! My Dad looked at me and said, “We took you trick-or-treating, so we get some of your candy.” 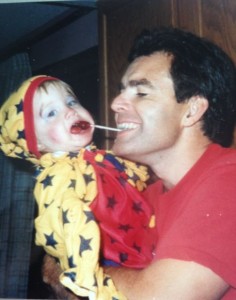 (This was two years before the candy tax law of ’93. I really should have anticipated that one.)

Granted, I was four and much too young to truly understand taxation, but in my mind it stood for someone coming in and unjustly taking something I had worked hard to earn. Almost 20 years later when I received my first “real job” pay check and saw Federal, State and New York City taxes taken out I’m pretty sure I opened up to my mouth to yell, “put it back!” 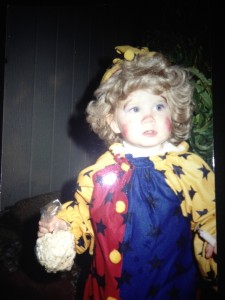 (I became increasing suspicious of everyone and guarded my loot carefully after Lollipop-Gate.)

Apart from my financial origin story, I learned about net profit by selling Krispy Kreme donuts at a yard sale*, candy tax is my earliest memory about finance and perhaps my biggest childhood grudge. My other grudges include the dogs getting to eat a whole cake on their birthday when I couldn’t. My sister finding the golden egg at Easter five years running. My eyebrows inexplicably turning from blond to black. And ruining my awesome Pocahontas sneakers because I dragged my feet trying to slow my bike down during a family outing.

Childhood grudges aside, I’m blessed to have two parents who were committed to making sure I had an understanding of finances early on in life. An understanding and respect of money is empowering and, in my opinion, one of the greatest gifts parents can give their child.

Even when we were little, my sister and I weren’t handed much. Sure, birthdays and Christmas were elaborate affairs filled with glorious toys, but in between we learned how to earn what we wanted or helped pay for it ourselves.

If I pointed out a toy at the store and asked for it, my Mom or Dad would ask if I was willing to pay for half. If I met them at 50 percent, then I could have the stuffed animal (it was always a stuffed animal). Nine times out of ten I wasn’t interested in paying the $4.50 it usually cost for a cuddly creature. However, this tactic taught me to evaluate purchases and prevent impulse buys at an incredibly early age. It’s a tough skill to learn later in life, especially when you have bills to pay.

Now, that I have reached “later in life” I’m pleased to be a millennial with a basic grasp on finances. According to mainstream media, the millennial generation is in big financial trouble. We can’t land jobs, with or without college degrees. We’re collectively drowning in student loans. As of October 2012, the average student is graduating with $26,600 of debt. And to top it all off we’re apparently all self-indulgent whiners who want to rely on parental welfare, well, forever.

Stereotypes aside, I have come across a fair amount of my fellow millennials who have a crippling fear of money, largely because they don’t understand how finance works. Those friends of mine were my motivation for creating #BrokeMillennial. Hopefully, this blog not only continues to develop my own financial literacy, but helps other fledgling adults learn some basics about budgets, saving and investing.  Plus, I think some real-life grownups find my stories pretty entertaining too.

P.S. If you ever think you see me out shopping, yes, I am the woman wandering aimlessly around the store clutching a cute blazer, trying to decided whether or not it’s worth my money. Unless it’s 50 percent off, then it seems like an obvious yes.

P.P.S. Don’t let the tough love with finances or candy stealing fool you. My Dad is an amazing father. 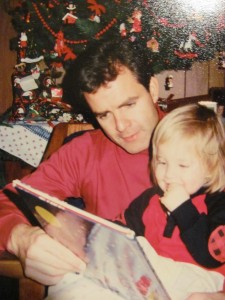 *For my financial origin story please read Donuts and Dollars.

51 responses to “Candy Tax and other Childhood Grudges”