Two weeks ago an astute reader commented on my post “Dealing with the B word” saying, “No student loans? Wow, you are very VERY lucky.” He had noticed my monthly budget doesn’t account for any sort of loan payment. That’s right folks, I’m a millennial anomaly. I’m 23 and I’ve never been in debt.

My reader is right, I am lucky. In 2012 the average millennial graduated with $27,000 in student loans. According to a Forbes article, this is a 58 percent increase from grads in 2005 who amassed $17,233 of debt. But the reason I’m “very VERY lucky” is because I made my college selection based on finances.

In April of 2007 I thought my choice had been made. In fact, the deposit had already been sent to Wake Forest University. Wake Forest seemed perfect. Small enough a professor might actually know me, but big enough to have a football team and thriving Greek life system. And best of all, it was in North Carolina (my home state). It seemed like a college where I could live a traditional “American college experience.” Granted, this was coming from a girl who hadn’t lived in America since fifth grade.

Then, my dad called a meeting.

Sitting down at our formidable dining room table I faced my dad who proceeded to slide a “bill” across the table. I always knew I’d be financially responsible for a portion of my education, but naively I’d neglected to ask just how much was expected from me.

He went on to explain if I attended Wake Forest I would be financially responsible for 50 percent of my education. I didn’t qualify for any financial aid and there were no scholarship offers on the table. Looking down at the bill I saw the devastating number  fifty percent of a Wake Forest education would cost. 80,000 dollars. I felt like the wind had been knocked out of me.

80,000 dollars of debt seemed insurmountable. I planned to be a journalism and theater double major. $80,000 wasn’t even a realistic expectation for two or even three years of income in either of those fields. $80,000 could take me a decade, maybe even two, to pay off. $80,000 just wasn’t do-able. I looked at him and said, “So, what are my options?”

Then he slid another “bill” across the table. I could go to school and come out debt free, if I went to St. Bonaventure University. St. Bonaventure is a small Catholic school in Western New York. My mother and all eight of her siblings went there. My grandfather had been a revered English professor and golf coach for half a century. He was known as “Mr. Bonaventure.”

I’d applied to Bonas as the obligatory safety school all school counselors require. It was in Western New York. It was too cold there. They didn’t even have a football team or Greek life. It wasn’t what I wanted in a college experience. In short, I had no plans to attend, until my dad slid that bill across the table.

St. Bonaventure offered me a fifty percent academic scholarship. Fifty percent, the magic number amount I owed for my college education. Assuming I kept the scholarship all four years, my parents would pay the other 50 percent and I could come out debt free.

We’ve reached the part of the story where I’m an ungrateful brat and run upstairs crying and slam my door several times for good measure. Instead of being grateful my parents could afford fifty percent with ease, I felt resentful they weren’t willing to pay for my education in full. I resented the limitations my financial responsibility put on my decision process. I could easily have picked Wake Forest and accepted the financial responsibility, but if you’ve read any of my previous posts you know what happened next. Eventually, I dried my tears and made the rational decision. In August of 2007 I became a Bonnie.

So yes, I am lucky. I’m lucky to have evaded the millennial curse and managed to graduate debt free. But, I also worked hard, academically, to be lucky. I made an emotionally difficult decision in order to be lucky. I elected to make a decision based on my financial future. I didn’t get the college experience I’d dreamed of, but so far I’ve been able to live a life I dreamed of and St. Bonaventure helped me get here. 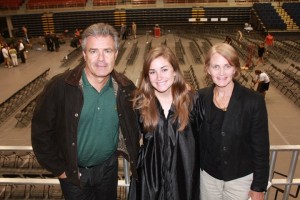 (Four years later there were no hard feelings.) 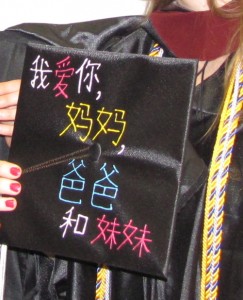 (I even professed my love for my mom, dad and sister on my grad cap.) 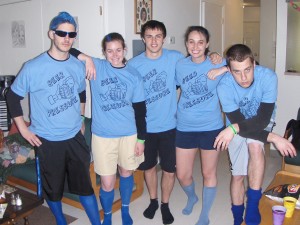 (Don’t worry. Some of it was a “traditional American college experience.”)

79 responses to “Confession: I Avoided the Millennial Curse”