One of my first “real” dates occurred in April of 2004. I was 15-years-old and a high-school sophomore and he was an adorable 17-year-old junior. We saw “The Aviator” (the Leo DiCaprio flick about Howard Hughes). Halfway through the movie our pinkies touched and a jolt of electricity went through my stomach. A few minutes later he was holding my hand and I silently prayed my palms would stay dry. I remember how he walked me home and went in for a kiss as I went in for a hug. He had about a 11 inches on me so a slight head bump was involved. We giggled nervously before he tilted my chin up and gave me a kiss. I remember so many vivid details of my first date, but I don’t remember who paid for the movie tickets. 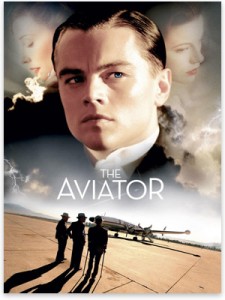 (He was such a stud-muffin before the peeing in jars scene.)

Politics and economics are tame compared to the controversy, drama and polarized opinions one unearths when discussing dating protocol. After being asked several times to address the topic of dating I decided to broach the discussion in a true millennial fashion, via Twitter. True to form, millennials responded with a variety of opinions about the financial implications of going on a date.

Here is what I learned: 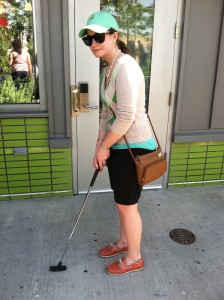 (I am both dope and an excellent mini-golfer.)

Personally, I’m in the “always offer to go dutch” camp. I’m pretty positive my 15-year-old self offered to buy my movie ticket. I’m never likely to turn down a free, well, anything, so the joy of having a man pay is great. However, it isn’t a deal breaker for me if he takes me up on the offer to contribute financially. Now, if a man asks me out and then expects me to pay, that would be a deal breaker. But, I haven’t really had to worry about it for a while.

I’m in a long-term relationship with a man I’ll refer to as Peach. We started dating my senior year of college and have always been pretty frugal with our dates. In fact, I distinctly remember a Valentine’s Day date in our campus dining hall. Peach paid for our first date, but these days we either split 50/50 or I force him to let me pay. I’m the working girl in the big City while he’s plugging away at grad school. 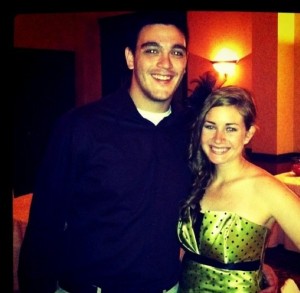 (We did not get this dressed up for our date in the dining hall.)

We’re also in one of those much beloved long-distance relationships. He’s pretty much the entire reason I’m a card-carrying Greyhound Rewards member. 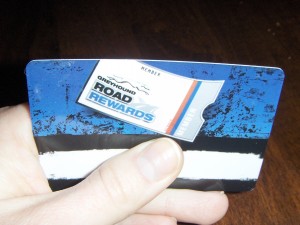 (Told ya so. Check out the post “Finding the Glamour in Greyhound” for details on cheap travel.)

Between being young, poor and paying for trips to see each other, we have very few pennies leftover for elaborate dates. Here are some of our fun, frugal dates (noted in cost per person): 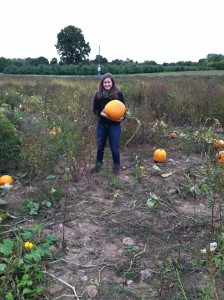 (A big pumpkin and two little ones were still several bucks cheaper than most small NYC pumpkins.) 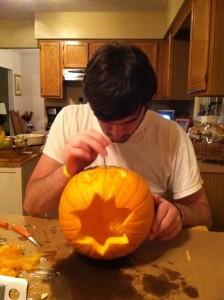 (I got to gut the whole pumpkin and taught Peach how to bake pumpkin seeds.) 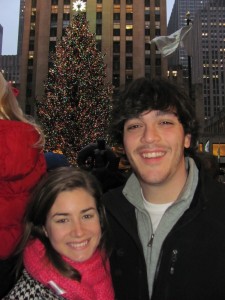 (After this photo we promptly fled the scene. Slow moving tourists drain all my Christmas spirit.) 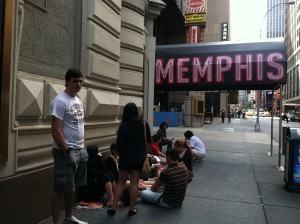 (He was super excited to wake up at the crack of dawn to wait in line for the cheap tickets.)

Dating can be a hassle and dating can be expensive, but there are lots of fun ways to pinch pennies while enjoying each other’s company. Unfortunately, there can be a large upfront cost (especially for men) when dating in a major city. Particularly if you want to date around and frequently meet people out for dinner or drinks. To that end, I suggest getting creative. I would appreciate playing a round of mini-golf on a first date or taking a stroll through Central Park and getting an ice cream. For my first date with Peach we went on a nature walk through Rock City Park (a park with large rock formations). 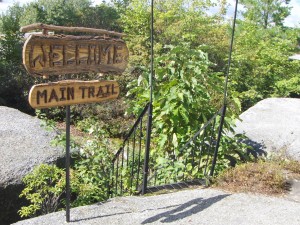 (Rock City Park only had one trail…)

Planning an upcoming date? Be sure to check out deals on Groupon, Living Social or using relevant apps such as ScoutMob.

What are your cheap date ideas? How do you deal with the finances of dating?

47 responses to “Braving the Financial Minefield of Dating”