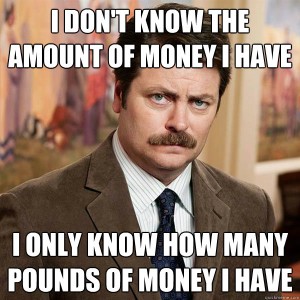 Tonight I fell down a rabbit hole in an attempt to understand the newest currency sweeping the land: Bitcoin.

Earlier today my best friend sent me a link to a Yahoo story boldly proclaiming “A College Kid Made More Than $24,000 Just by Waving This Sign on ESPN.” The sign said “Hi Mom Send”…then featured an image of a Bitcoin along with a QR code which corresponded with his Bitcoin wallet.

His sign made it to the front page of Reddit where the Internet’s finest proceeded to send him money…just because?

My best understanding, he was sent bitcoins by fellow digital-currency enthusiasts because he helped generate publicity for the cause.

Regardless, the unidentified kid secured a total of 22 bitcoins which, when the Yahoo article was penned early in the day on December 2, was equivalent to $24,000. About 12 hours later, while I was writing, his 22 bitcoins netted $21,945.94, according to the Coinmill Currency Converter or $22,542.52 if you agreed with Bitcoinexchangerate.org.

Needless to say, bitcoins are volatile.

After reading the Yahoo story, two thoughts lingered with me — how exactly does Bitcoin work? And is it really like having $24,000 or is more like monopoly money that works in very specific circumstances?

Officially Bitcoin is “the first decentralized digital currency.” The system was created in 2009 — but hasn’t gained mainstream popularity until recently. No one owns the Bitcoin network and the creator is anonymous. In 2010, he (or possibly she) left the project in the hands of developers. According to the official website, anyone can review the open-source code and even make their own modified version of the program.

In my mind, it’s sort of like PayPal, but without government approved currency or the ability to immediately transfer your money into your bank account.

There are some currency exchanges that allow you to cash in bitcoins for legal tender, such as the site Mt.Gox. Unfortunately, due the unregulated nature of bitcoin, it’s been easy for people to be scammed and hacked when trying to convert into USD (or any other currency).

What is the significance of Bitcoin being decentralized?  For one it isn’t government regulated (which made criminals early adopters of the technology). It also doesn’t have any form of hierarchy within the system. And unlike your bank, Bitcoin doesn’t have a centralized system to facilitate transactions.

Instead, it relies on users participating in a process called mining.

How do you get Bitcoins?

Mining Bitcoins is a passive way to accumulate digital wealth and become the proud owner of a bitcoin (or a fraction of one) without using local currency to buy into the system.

Your bank owns rows-upon-rows of massive computers and servers, in undisclosed locations, all working to send your money from one account to another when you transfer funds or get a direct deposit or pay a bill. Because it’s decentralized, Bitcoin harnesses the internet and users’ computers/servers to provide the computing power and perform the necessary algorithms allowing the financial system to operate.

You don’t need to be a computer whiz or understand coding, you simply have to sign up, download the software and leave your computer running. Mining seems to be like the CD of the bitcoin world, while trading the coin is similar to buying individual stocks. The latter is far riskier, but where the money is to be had.

This video offers digestible explanation about mining — even though the miner sounds a bit like Ferris Buller’s teacher.

If you aren’t interested in setting up mega servers, you can join a pool to harness your computing power together to earn bitcoins.

Bitcoins can be used for peer-to-peer transactions. For example, if you hire a freelance writer who accepts bitcoins, you can pay him or her with those digital gold coins instead of sending money through PayPal or a direct deposit.

The use of bitcoins in “the real world” is a bit more difficult. Some mainstream companies have started to accept them, including a Subway (sandwich) store in Allentown, PA. It should be noted, the whole franchise isn’t allowing this payment, just the specific Allentown store. A barber in Reno, Nevada accepts bitcoin to avoid the merchant fees when customers’ use credit cards. Various business owners who sell goods online have started accepting payment in bitcoins.

Some larger companies including WordPress, CheapAir.com and OK Cupid have jumped on the bitcoin band wagon. It also probably doesn’t surprise anyone that Sir Richard Branson will allow you to fly into space on Virgin Galactic for $250,000 worth of Bitcoins – which today would be about 250 bitcoins. My personal favorite, The University of Nicosia in Cyrpus will not only allow you to pay tuition fees with Bitcoins, but they’re offering a masters degree in digital currency.

Everyone still has to convert bitcoins into local currency in order to pay their bills. A simple fact which still leaves me thinking of bitcoin as monopoly money, as it can’t be used in a majority of real-world stations — just with those willing to play along. But there is more to learn!

Now that we’ve covered the basics, what are your initial impressions of bitcoin? Is the currency of the future — or the largely predicted tulip bulb of our generation?