Nearly a decade ago I left for college with the intention of getting a degree in theatre and then bursting onto the scene in New York City as an actress. I didn’t fantasize about being famous, but rather about being in plays with social missions that would spark conversations and change public opinion. It’s no surprise I adored shows like Rent, The Vagina Monologues and Fat Pig.

The biggest part of the reason it didn’t happen is because I never really tried. I went to a university with absolutely no notoriety in the theatrical world. I landed a lead as a first-semester freshman and instead of encouraging me it made me feel like there was no competition to push me and develop my chops as an actor. By the time I graduated, I’d talked myself out of even giving it a proper go and instead focused on finding fringe ways to experience the entertainment business without having to risk failure.

Then I landed as a page at The Late Show with David Letterman.

Spending a year of my life surrounded by aspiring comics, writers, actors and actresses who pushed themselves daily to create content and risk humiliation on stages around New York City just made that little voice in my head go, “See, you don’t want it badly enough. If you did, then nothing would stop you. Now get back to making this lady’s bone dry cappuccino.”

So, I let the little voice of doubt win.

After my gig in the often-not-so-glamorous world of entertainment ended, I snagged the first salaried job with benefits that would have me and then stumbled into a short-lived career in public relations. Thanks to the sheer boredom I felt about my then job, I returned to my childhood love of writing in my spare time (mostly because I could do it for free) and Broke Millennial was born.

While this story does have a happy ending, I offer it up as a cautionary tale about what happens when you fail to invest in yourself and follow your dreams. The reason I say this is because I’ve been able to live vicariously through a special person in my life and get a glimpse into the should’ve, could’ve, would’ve of my decision to avoid potential failure. That person is my sister. 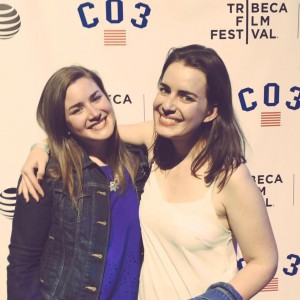 My younger sister (even though she doesn’t look it) of three years did everything exactly as I wish I had. She believed in herself. She invested in herself. She dragged herself through the trials and tribulations of freelancing full time and never being quite sure when she’d be getting another paycheck. She dealt with balancing paying gigs with the pursuit of creative projects. Then, at the tender age of 23, she found herself a co-writer/producer/director of a short film in the Tribeca Film Festival.

But let me go back to the beginning.

Cailin began her journey by making a risky college decision. She went to film school. This wasn’t just any film school. Cailin went to number one film school in the country: University of Southern California. Sorry, NYU – it’s true. Suffice to say, she had the talent from the get go.

Through four years of college, I fielded many a phone call from her questioning her career desires. Did it make sense to pursue not only a ridiculously competitive field, but also one not particularly kind to women? Would she ever make it or would she instead just turn to a desk job within a few years of graduating once all the hustling and working for free got old – and unsustainable? And as with all talented individuals, she dealt with some imposter syndrome and voiced concerns about whether or not she was actually good enough.

Then graduation hit and she left the cozy cocoon of USC in May of 2014 and started trying to make it on her own, or at least pay her bills.

The first year came with lots of highs-and-lows. She learned the hard truth about determining your financial value and how to market yourself and network for jobs. She realized how easy it was to set a price that meant you were actually making less than minimum wage because you’d pull 20-hour days. She learned she should’ve listened to her sister and filed quarterly estimated taxes. But she kept pushing, while occasionally calling to voice some doubt about her chosen career path.

During this time, Cailin and two of her cohorts from USC kept working a project born out of summer boredom. (Apparently getting inspired when you’re bored is a thing in the Lowry family). The idea was for a TV show focusing on four women in a band who weren’t boy-crazed and instead actually wanted to be successful. You know – like how we empowered women are in real life but never actually gets reflected on TV?

The three of them kept writing and re-writing drafts of a pilot episode as well as original music for the show. Eventually, they 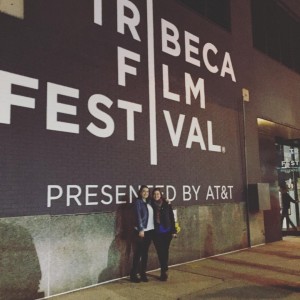 started getting some attention and meetings with people that pretended to matter and thus created a “bible” aka a huge document with proof of concept that you’d take into a pitch meeting. Cailin would keep calling about these big meetings that seemed to go somewhere to a point, and then traction would just stop.

Tired of feeling like folks (or rather middle-aged-white-guys) just weren’t totally grasping the concept of Girl Band, the ladies took matters into their own hands and decided to invest their own savings, and capitalize on the friend economy of having other wildly talented friends who could pitch in for free, to create a pilot episode.

Months passed and rather on a whim, Cailin and her two co-creators decided to submit the film to the Tribeca Film Festival. The notion of being selected seemed absurd to these three smart, driven, talented women. So, Cailin went back to life as usual. Hustling to make ends meet while writing in her limited spare time and trying to figure out where exactly she wanted to go next.

Then the phone rang.

Tribeca came a calling and invited Girl Band to have its world premiere at the festival in the Shorts Program.

This is only the beginning. But the point is that my sister invested in herself, believed in herself and fought through the downturns in freelance life to keep pursuing her dream. There may be a day she decides to walk away from the entertainment industry, but I doubt she’ll ever regret investing her time, money and creative capital to make her dreams a reality. Because no matter what happens next, she’s already achieved the greatness so many of us only dream about because she was willing to take the risk. For that reason, and plenty of others, she’s a role model to me – even though she’s my little sister.

For those interested in freelance life, I offer you a little insight from the always witty Cailin:

Here is a partial syllabus for the class on freelancing I wish I had been given the option to take in film school:

22 responses to “Take the Risk and Invest in Yourself”