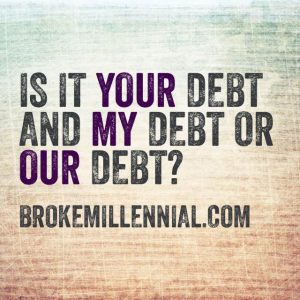 Being relatively transparent about the financial state of a romantic relationship certainly isn’t the norm for most people. It is, however, the norm that Peach and I choose to live. While I don’t go spouting off his exact debt load, we’ve been vocal about the fact that I’ve lived a delightfully debt free life and he’s saddled with student loans. The fact that I’ve fallen in love with a man who comes with the baggage of debt means we’ve spoken ad nauseum about our strategy for handling money post-nuptials.

Before people get excited, no, we are not engaged*, we just talk about this stuff openly, honestly, and probably a little too often.

I’ve written about getting financially naked before and routinely spout off about my opinion that couples should work jointly in handling money and share their ledgers before marriage. However, there’s something about hearing me talk about it and allowing Peach to vocalize his opinion himself instead of through the lens of my writing that seems to have struck some folks, including my mother. But first, let me back up.

Peach and I ventured into the depths of Brooklyn last week to record an episode for one of my favorite podcasts, The Paper Year. It’s not a money podcast (because I do actually consume non-personal finance content). The Paper Year is chronicling the hosts’ first year of marriage. Each episode, the hosts Evan and Caitlin talk to a different couple in various states of matrimony, or in one case divorce, and the often 1.5 hour long conversation is a deep dive into the couple’s backstory and strategies for relationship success.

After binging the first seven episodes, I expressed my enthusiasm for listening to complete strangers talk about their love lives on Twitter. 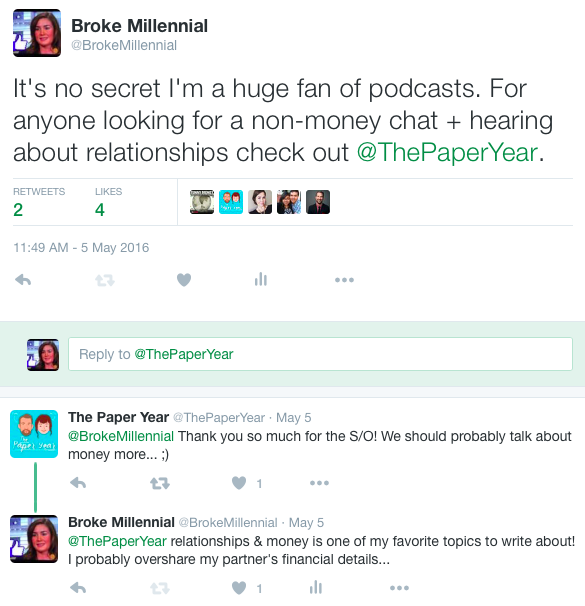 This little interaction ultimately turned into an invite to be on the show. I was quick to offer a disclaimer that Peach and I aren’t actually married, but luckily, Evan and Caitlin decided not to discriminate against us singles.

Peach, who has always wanted to be a shock jock, leapt at the opportunity to do a podcast and finally get to defend his stance on finances in person! I jest – sort of.

The episode went live on Monday, so it’s been fun to hear people’s reactions to learning more about our relationship with each other and our individual relationships with money.

I spoke to my mom on the phone after she finished listening and she noted that she’d never really heard anyone speak about debt in the way we do. I feel strongly that it’s not a “yours or mine” situation but an “our” relationship with debt after marriage. Once those legal documents are signed, we’re in this thing together! 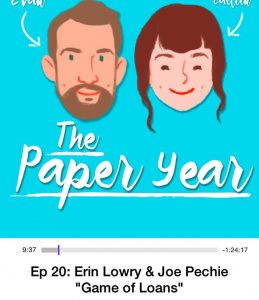 Instead of further explaining my stance, I offer you a transcript of the conversation which includes Peach’s feelings on the matter. I highly encourage you to listen to the full episode, but if you just want to hear what Peach and I sound like whilst speaking about our debt plan, then skip ahead to minute 59 when this all starts.

Editor note: I did make this a little easier to read so some sections aren’t exactly word-for-word because I cut out the space fillers or added names instead of pronouns.

Evan (the host): “I had massive credit card debt. I had quite a bit. I told Caitlin, I don’t want to combine our finances until I pay that down.”

Caitlin: “They’re [Peach and I] sharing really cute looks right now as if you’re telling a romantic story. I love that this is romance for you guys.”

Evan: “I wanted to keep our finances separate, so that I could pay the money so that it wasn’t Caitlin’s debt that she had to pay, because that just felt kind of unfair.”

Peach: “We’ve spoken about this in depth. You know, when we do get married it theoretically becomes our debt.”

Me: “It does become our debt.”

Peach: “Even though it’s my student loan debt and she’s very comfortable with maybe one person’s salary going towards living expenses and with the other one we just try to destroy the debt as quickly as we can. And it’s nice because I don’t feel like it’s her just trying to do it for me. The conversations and the way that we talk about it is a we’re going to do it together and we’re going to figure this out as a team.”

Me: “Well, he started where you [Evan] are. When we first talked about this, maybe about three years ago I want to say, it was a ‘this is my debt, I’ll deal with it.’ And I said, ‘okay for now that’s fine, but when we’re married it’s not your debt it’s our debt because that debt impacts my life. Like if we’re getting a mortgage, anything like that, the debt comes into play. So if I’m making enough that I can support us as a couple and our day-to-day living expenses and some of your money goes to savings and the rest goes to debt and we can eliminate that in like a year or two, why wouldn’t we do that? Because then it’s just done. And we can also hit next phases faster if we’re working as a team and combining our income.’ It did take a while for you [Peach] to come around to that idea because you felt ownership.”

Me: “You felt like, this is yours I don’t want to burden you. This shouldn’t be an albatross in our relationship.”

The conversation continues, but alas, I got tired of transcribing so you can finish it out by listening to the podcast episode. Some of the highest praise I received was from my mom about how she really appreciated our joint mentality on how to handle our finances in the future, after all, money is a common source of tension in a marriage. We may not always see eye-to-eye on how to spend our money (*cough* comic books *cough*), but at least we’re open about the communication factor.

In case you were wondering, Peach officially went public with this episode. The reason for his nickname is that his last name is pronounced “Peachy”. I also do call him Peach in real life, as you’ll hear on the podcast.

*We’re engaged now and will be married in September 2018.

23 responses to “Is it Your Debt and My Debt or Our Debt?”